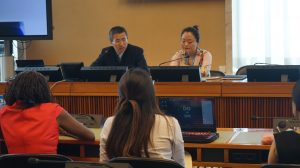 On June 20th, 2017, Geneva, [Zhicheng Public Interest Legal Aid and Research Center] (“Zhicheng”), a Chinese non-governmental organization, convened a side meeting to call for a world free of violence during the thirty-fifth session of the Human Rights Council of the United Nations. Mr. Tong Lihua, the Director of Zhicheng, made a keynote speech, sharing his concerns on the challenges to the human society posed by violence, and proposed to “build a world free of violence”.

Representatives of many international organizations attended the meeting, including International Bridges to Justice and Ending the Exploitation of Children.

Mr. Tong said that non-governmental organizations in China are paying attention to the challenges faced by the human society with the development of Chinese society. “One of the biggest challenges we face currently is violence in many forms.” Tong remarked.

Statistics showed that about 16,000 children under the age of five die everyday worldwide; about 1.4 million people died from violence every year, 80% of which committed suicide or were killed. In the year of 2015, more than 150,000 people died in wars or military conflicts. The sharply increased terrorism and hate speech and violence on the Internet are casting a shadow over the future of human beings.

In response to the growing challenges, Mr. Tong made his suggestions from a perspective of Eastern philosophy. First, he appealed to the international community to foster a culture of self-reflection. “We should think seriously about the realities we face, the problems we as individuals have, and how we should act. This way of thinking should be adopted by every individual, non-governmental organizations, enterprises, governments and up to the level of the United Nations.” Tong said. “It has been a trend for many years that we criticize and accuse of others, hoping to change them and even the world, rather than reflecting on and therefore changing ourselves. Conflicts can be reduced only if we self-reflect and understand the shortcomings of ourselves; on the contrary, blaming each other would only intensify the conflicts and even to create new ones.”

Meanwhile, Mr. Tong believed that despite these challenges, we could never lose our faith but to have the courage to confront the problems, and envisioned that we had the ability to build a world free of violence. To realize such goal, Mr. Tong proposed eight particular courses of action, among which included –

Firstly, a special committee dedicated to the elimination of violence to be established by the United Nations human rights agency. The new committee should work with other United Nations bodies, governments, enterprises, and non-governmental organizations to recruit experts with hands-on experiences to solve issues.

Secondly, to promote legislation to fight against domestic violence, and to establish national children protection committees and experts committees.

Thirdly, to push for the resolutions on addressing hate speech and cyber violence.

Fourthly, to explore and share effective experience in how to prevent and deal with violence.

The meeting ended with a Q&A session and received very positive feedback. Many attendees expressed their delight to hear the voices from a Chinese non-governmental organization like Zhicheng. They were also inspired by the proposal for a “world free of violence” put forward by Mr. Tong, and agreed to strengthen cooperation and make a joint efforts to address the violence faced by the human society.