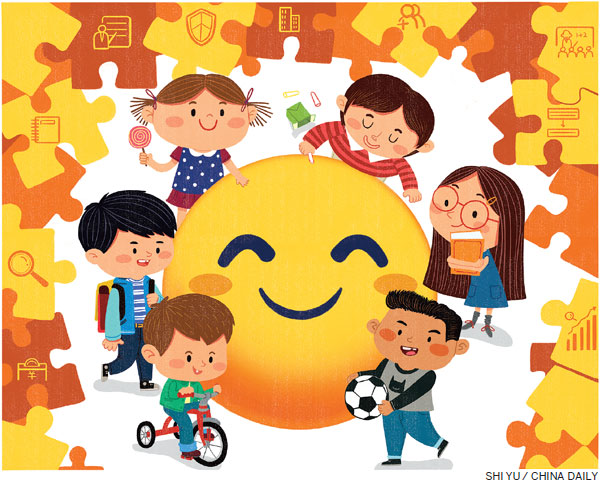 By 2020, the targeted gross enrollment ratio of kindergartens will increase to 85 percent, with 80 percent of those kindergartens run by the government or private capital but providing affordable services.

The increase in the ratio, a statistical measure used in the education sector, was stipulated in a guideline jointly released by the general offices of the Communist Party of China Central Committee and the State Council last week.

A broadly based and quality public service system will be established for preschool education by 2020, with substantial governmental support and regulated operations in the sector. Big and mega-cities will take the lead in accomplishing the goal.

According to the Ministry of Education, China’s gross enrollment ratio into kindergartens was 64.5 percent in 2012, with 36.86 million children being educated. The ratio climbed by 15.1 percentage points in five years. The country had 255,000 kindergartens last year teaching about 46 million children, and the gross enrollment ratio was 79.6 percent.

Also by 2020, a training system for kindergarten teachers will be set up with a focus on colleges. More than 200,000 students majoring in preschool education will join those currently teaching. Meanwhile, the country will also train another 1.5 million kindergarten headmasters and teachers.

The guideline says public kindergartens will account for at least 50 percent of all such institutions nationwide, another 30 percent will be affordable kindergartens run by private investors but offer services charging no more than public ones. Private profitable kindergartens can take the remaining 20 percent.

If these targets are fulfilled, about 3 million more children will get into affordable kindergartens in the next two years as the country strengthens public services of preschool education following a series of recent scandals in privately operated ones.

Wang Xing, a 36-year-old IT engineer in the Changping district in Beijing, took turns with his father to line up overnight for public kindergarten enrollment for a daughter in August.

Like Wang, many parents found it hard to get their children into public kindergartens, which usually charge less and are managed more strictly.

For example, a public kindergarten in Beijing usually charges around 1,000 yuan ($144) per month for one pupil, only 10 to 25 percent of the money paid to private ones.

“For my overnight queue three months ago, I found a shortage of public or affordable kindergartens in this huge city. That’s why my family spoke highly of the new guideline,” Wang said.

Wang said many of his friends expect more public kindergartens to be available near their own communities, and hope the new guideline will provide better affordable preschool education.

According to the 2017 National Statistical Report on Education Development, privately-run kindergartens accounted for 62.9 percent of the country’s overall number last year. It means about one-in-seven communities or villages had one public kindergarten, while other children had to go to private ones, which are more expensive and have been plagued by scandals like child abuse.

Meanwhile, on average, the pupil-teacher ratio was 18.91 in kindergartens last year, much higher than primary schools and high schools.

Xiong Bingqi, deputy president of the 21st Century Education Research Institute, said the new regulations in the guideline follow a series of scandals in preschool education, including shortage of supplies and poor quality of services and teachers, even for those very expensive kindergartens.

Affordable preschool education should be boosted by building more public kindergartens and providing support to privately-run ones, he said.

For those who want to earn large profits by running kindergartens, the guideline was a warning, but it’s beneficial for bringing preschool education back to what it should achieve, said Yu Feng, assistant professor in law at East China Normal University in Shanghai.